With Game Update 1.3, Champs: Battleground introduces a leveling mechanic for all Champs. Leveling a Champ allows them to gradually become more powerful, and also adds a reward bonus almost every time you play Champs.

How to gain experience[edit | edit source]

Playing any match in Champs: Battlegrounds (except Challenge Matches) will grant experience points. Only the Champs that were in your squad during your match will gain XP.

Each Champ begins with zero experience, at level 0. Levels are based on Tiers; a Tier 1 Champ must advance to Level 5 before it can be upgraded to a Tier 2 Champ. (A Tier 2 Champ can be purchased at any time using BP or QP, however.)

Each level grants a bonus to the Champ, detailed below:

Relics are a powerful addition to Champs: Battlegrounds, allowing you to customize individual Champs with items that boost their stats. Using relics can give you a crucial edge in battle.

You can acquire relics by winning battles, or if you wish, by purchasing chests which hold relics. There are three ways to win relics by playing Champs:

Campaign: On acquiring 3 stars of some campaign levels, a Common-Epic level relic may be awarded for victory. If you replay a Campaign battle after achieving 3 stars on it, you will not be awarded any relics.

Player vs Player: In standard PvP matches (not Challenge Friend matches) you have a chance to be awarded a Common-Epic level relic upon victory.

Relics can also be found in chests, which can be bought with Quark Points (QP). Three levels of chests are available:

There are four levels of relic rarity. In-game, you can see the level of rarity of a relic quickly from looking at its shape; relics become more 'rounded' as they increase in rarity.

Each level of rarity increases the overall potential power of a relic, depending on which gems are equipped in the relic (these are also referred to as 'affixes').

However they're found, relics are generated randomly when you acquire them. As well as the relic's rarity, which determines its overall power (and also its shape!) relics have two gem 'affixes' which are listed at the beginning (the prefix) and end (the suffix) of a relic's name. Gem affixes are also shown from the color and icon on the relic. For example, a Common Brilliant Relic on Defense looks like this:

Here is a guide to gem prefixes and suffixes:

The relic interface can be accessed from the Army management screen (tap Army from the main screen). After selecting any Champ, take their portrait, then tap Relics on the left hand side to bring up the Relic Management screen.

Tap on any relic to see its rarity and gem prefix/suffix, along with the exact details of their benefits and their sale price. 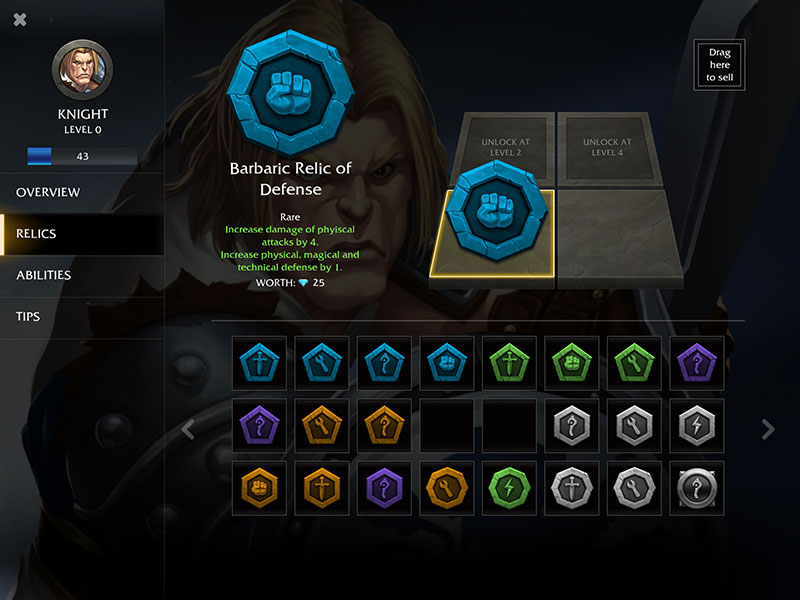 Relics can be removed from a Champ at any time, and re-used on any other Champ as long as you have open Relic slots. Just drag the relic you want to remove or re-use.

If you decide you don't want or need a relic any more, you can sell it for Battle Points (BP). Just drag the relic into the box on the top right. You can see what any relic is worth by tapping on it. Note there is no confirmation to sell a relic, so be sure you want to sell it before dragging it into the box!