After completing the tutorial and first few campaign quests, you will have a collection Apprentices, Squires, and Vagabonds. This guide takes advantage of this to use very few resources to produce a strong army composition. This composition focuses on the use of Zone Control. Due to how narrow the PvP maps are, units can be strategically placed to have their attack ranges overlap. By doing this, you create tiles that your opponent can not enter without taking heavy damage. By using units with high AOE DPS, you can create entire "zones" of tiles that are dangerous for your opponent to enter. 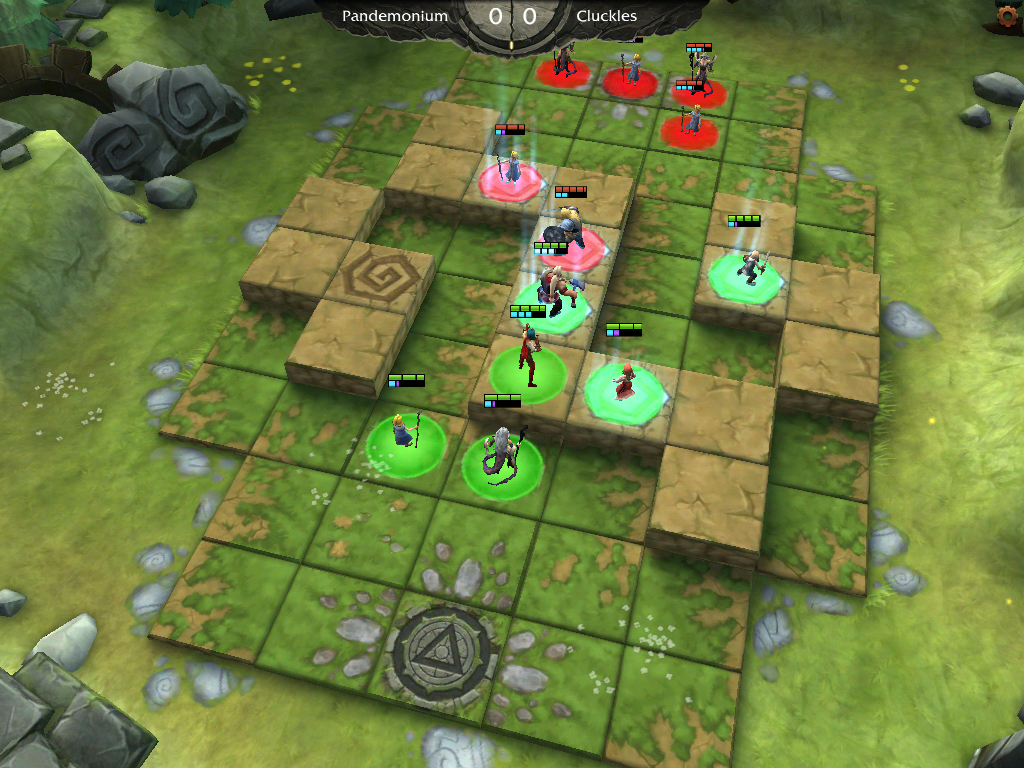 Your first move should be to move your Axeman to your center energy tile as seen in the image. The Axeman can then use resharpening/Cleave to control the middle of the map through strong AOE damage that will limit your opponent's ability to press forward to your backline. If your opponent fails to quickly take their energy tile, a second move onto that spot can be taken before resharpening.

The second character to move should be your squire. Due to its high starting energy and 3 movement range, you will likely be able to take control of the top right energy tile even though it is closer to your opponent. From this spot, you can use Pushback to control the right side by knocking back your opponent's units or stunning them. If the opponent does not assault the right side, Rock Toss is able to take advantage of the high ground to attack vulnerable targets. Remember, Pushback should be the priority.

Next you will want to move the vagabond to the energy tile 3 spaces in front of it to immediately begin charging. From this spot, you are in good position to use your Killshot frequently on low ground opponents. If the opponent moves up the left side with a Squire or Knight, you can move the vagabond forward to prevent your Axeman from being knocked out of position, protecting the energy tiles. If the Vagabond ends up in the front line, pay attention to what your opponent targets and use Dodge should your opponent try to target the Vagabond.

You should press forward with your apprentice to take the left side high ground, and optimally the energy tile on this side. From here, the Apprentice can use its Heal on your center energy tile. It also places your Apprentice in range for Fire Bolts on the left side low ground, as well as your opponent's high ground. The priority here will be to target enemies moving quickly up the left, with the exception being if your opponent comes with a Knight. Knights have too much health to quickly take down, and their effectiveness can be largely nullified by using you Vagabond to protect against Push Backs as mentioned earlier. In the case of a Knight, protecting against the Pushback and intermittent Heals will allow you to ignore the Knight. Should no opposing units try moving forward, focus on landing killing blows and healing your Axeman.

On the first turn, you will want to move your Sorceress forward where it will be in position to react to your opponent's opening. Should your Vagabond need to move forward, the Sorceress can move up into the now vacant energy tile to apply heavy damage up the middle and give Spirit Shields to your Axeman. If your opponent was slow to take their energy tile and you captured it first, you can move your Sorceress up onto the high ground and support the forward push. If the situation does not allow for either of these moves, the Sorceress can move to the left high ground with your Apprentice and follow the same basic strategy of the Apprentice.

After the initial moves which will be be fairly constant between games, your strategy will need to shift depending on the specifics of the enemy composition. Considerations such as focusing on killing a Corruptor/Ghoul before it can get stacks may need you to re-position to get the killing blow on it before it's too late. If the opponent have an Engineer/Tinker or Planter/Wilder trying to block off tiles, your Squire can advance aggressively to Pushback the opponent and prevent it from blocking tiles that your main army is moving through. If the opponent is using a cleric to create a massive tank, advance aggressively down the middle and left past the unit and attack the backline while using your Squire to create a path. This guide is meant as a basic strategy that will work in most cases, however, specific compositions will require specialized counterplay.

"Do not run away." Rather than moving a unit backwards to avoid being killed, it is more useful to get off one more attack before you die. Because 4 of the starting units received are ranged, your opponent will most likely have a unit on high ground that will still be able to attack and kill your unit. In the "best case" scenario where you get away safely, you only have 1 Apprentice that can heal for 100hp for 4 energy. With many of the tier 2 units having moves that do 120+ damage, you will likely need to use 8 energy from your Apprentice to make your injured unit be able to take a hit. This means that you are getting 0 value from these 2 units for this time, turning the main battle into a 4v6. Of course, there is the obvious exception to this rule in the case where your opponent is about to win. Another exception would be in the case of retreating from a unit that can gain stacks(Ghoul or Corruptor) to avoid allowing them to become too powerful.

"Do not underestimate the strength of tier 2 units." These units have significant advantages in their base stats that translate to the strength of their skills and innate tankiness. Remember that this composition as listed only makes use of 3 tier 2 units to make it easy to acquire, but the composition will need to be modified as you begin to play opponents with 4+ tier 2 units. However, even as you begin to upgrade your units, think about which units allow you to have strong zone control.

TL;DR - Early on it is most effective to use high DPS units to generate strong zone control and limit your opponents moves. Proper zone control can win games when properly utilized.