Welcome! Champs: Battlegrounds offers a number of ways to play that many players may not be aware of when they first enter the game. Below is a brief introduction to the game, as well as a list of the features available for a new player to play.

Champs: Battlegrounds (or just Champs) is a Multiplayer Online Squad Strategy (MOSS) game for mobile devices, where a player commands a squad of 6 units (known as Champs) to wage battle against another squad of 6 on a grid-based battleground.

Battle happens in real time, as commanders on both sides simultaneously position and utilize their Champs to gain control of the battleground and take out the opposing team using each Champ's unique abilities.

Each Champ is powered by Energy (a resource constantly regenerating during battle) and have an energy pool of 5 bars, maximum. Whenever a Champ wants to perform an action, they must use energy from their energy pool. Each Champ has the ability to Move (costs 2 energy), perform a basic attack (3 energy), or cast one of two other unique abilities (4 energy/5 energy). (These abilities are often referred to as 'ticks', eg a '4 tick' ability.)

In a standard match the object of the game is to be the first to get 8 kills. This "standard match" is also known as "deathmatch." If an allied Champ dies during battle, it immediately revives near the rear of the battleground, but a point is added to the enemy's kill count. The primary strategies to achieving victory are choosing a balanced army that synergizes well, positioning your army advantageously, and using/conserving your army's energy wisely.

Benefits of the Tutorial[edit | edit source] 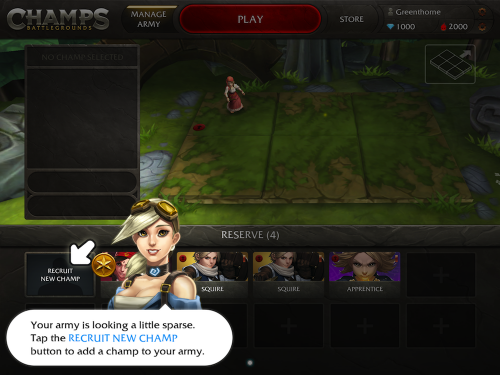 The tutorial is primarily designed to help teach players new to tactics, as well as touch-based interfaces, the basic controls around a standard battle. It also provides players with a basic understanding to the tactics most battles revolve around, namely: securing energy tiles and high ground.

Energy tiles look like this. They are tiles found on most battlegrounds that provide double the rate of Energy regeneration to any Champ standing on them. 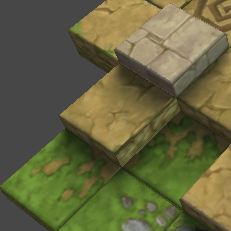 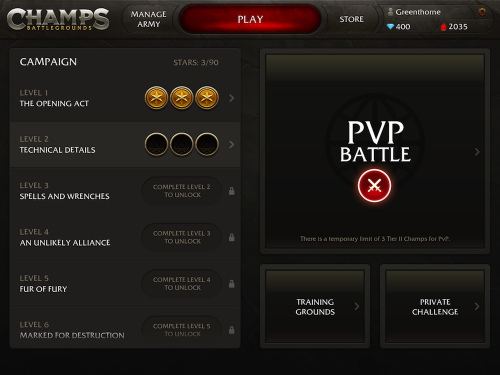 The Lobby is your hub for accessing the various parts of the game (various game modes, the store and managing your army).

Coming out of the tutorial, some players will want to dive right into PvP battle, which is great, as it is the bread and butter of the game. But many players will find this fairly punishing and will want a more gradual ramp into PvP matches. This is where the Campaign works perfectly for new users.

The Campaign is a series of 30 levels specifically designed to start at fairly easy levels but quickly scale in difficulty. Not only does the speed and intelligence of the AI increase with each level, but new maps and Champs are introduced as well, adding more interest and challenge with each progression.

After completing a campaign level, the player is given a rating out of the 3 stars. With each star earned the player receives BP (Battle Points) and QP (Quark Points). You can use either BP or QP to purchase more Champs. Each star can only be earned once, but players can go back to levels they have previously completed to earn stars they did not earn during their first play-through. Once 3 stars are earned from a campaign level no more BP/QP rewards can be earned on that level.

To play a campaign level, tap the Play button in the middle of the top bar, and you will find the campaign levels listed numerically on the left side of the screen.

Player versus player matches players of similar skill and army levels to a standard deathmatch. PvP maps are symmetrical in design, in order to preserve fairness between the two players competing.

Players earn BP from completing PvP matches. Players earn considerably more for winning than losing, but you will always get BP if you complete a match, win or lose.

To play a PvP match, tap the Play button in the middle of the top bar, then tap the PvP button on the right side of the subsequent screen.

The Proving Grounds follows the general format of PvP but against an AI opponent. It's generally a good place to test out new Champs, army formations, and tactics before entering a PvP match.

Players can also send private challenges to friends to enter into a PvP match with someone they know.

To enter a Private Challenge, tap the Play button in the middle of the top bar, then tap the Private Challenge button below the PvP button, then enter the username of the player you want to challenge. To find other players to play matches against, join the official Champs: Battlegrounds forum!

As you play Champs: Battlegrounds, you'll gain BP/QP and of course, experience in playing the game. Learn more about effective strategies and factors to consider when forming a squad in our Strategy section.

One of our designers, Rysorial, narrated this video that discusses beginning strategies in Champs. This YouTube video shows off what you can do with the Tier 1 Champs you'll receive for playing the tutorial!

For detailed information on the battleground maps, click here