This Guide is specifically aimed at keeping full control of the energy tiles in the center with your Bandit and Engineer while also creating a fully synced Team with the apprentice and Cleric on the field supporting the damage dealers, it creates the feel of a Titan on the field, one that your opponent cannot bare to fight! That Titan, Can be you, Once you have mastered this Setup!

In This Setup the Bandit and Engineer are your two main Damage dealers. The Bandit is the main priority in this setup to keep the rope together in this lock-down setup, if one shall fall you must improvise by blocking that tile were she was at until she is able to get back on it again. The bandit is also a easy way to win a swift game, without your enemy being able to catch up to your kills. The bandit also can setup deadly combos with both bandits being able to hit the same multiple targets, Or focusing down a target with the apprentice using fire bolt and pierced shot. The bandit can also pump out pierced shots with the help of the Engineer providing his ability to the Bandit,ENERGIZE. The Engineer however, is the heart of the Lockdown setup. with the Engineers unique ability to send his spell "ENERGIZE, to your selected ally, he can keep punmping it out at a fairly quick pace since energize is third ability, That is why he is called the "Heart of the Lock-down setup" Because he basically pumps Fuel to your allys at a constant rate! Dont forget engineers last ability, Mine, The engineers mine also comes into good use, Smart enemys will think he can get you down from behind your lockdown setup, or surround you, but with the engineers mine you can stop that from happening. it is recommended also that the mine is placed in weakspots or vunerable spots that you notice your enemy player keep rushing too, (Places like your healer, or next to the bandits so they can try to knock the bandit off the energy block) Those are the most ideal spots to place your mines when on the offensive, so they do not have once chance to reach you.

With The Cleric And Apprentice on your team, you will have a Chain like Lock-down formation, were as, no matter how hard the enemy pushes onward to trying to kill your units, your healers can most likely heal all your champs, Alongside having the ability to chain heal (Having heals received at a constant rate to your Damage dealers or other champs in trouble at a very constant rate.) The Apprentice is a versatile healer, so it is good to have her for defensive positioning and offensive positioning, Thus she will be able to heal your champs when on defense, and shoot her Fire spell to her enemy's without a problem. The apprentice is also the secondary string of damage dealer in this setup, once you have got the hang of this setup, you can easily create deadly combos with the bandit and the engineer, provided him giving your the ability energize. The cleric on the other-hand, is strictly on this team to reduce incoming damage on a ally champ that is being focused down. To maintain the offensive on this team full-time, it is good if u keep switching the shield onto other ally's that are being focused down, and not just on one person the whole game. The Cleric is the backbone of the squad, For she is the ultimate defense on your team aside from the versatility of the other champions, Her shield raises up your ally's defenses, which when constantly moved to the ally that needs help, the damage dealers can switch onto the enemys that were attacking the ally with the shield, but however cannot do much now because of it, so they are vunerable and make easy pickings for the bandit and engineer. practice the shield swapping, and you will win every game like me! 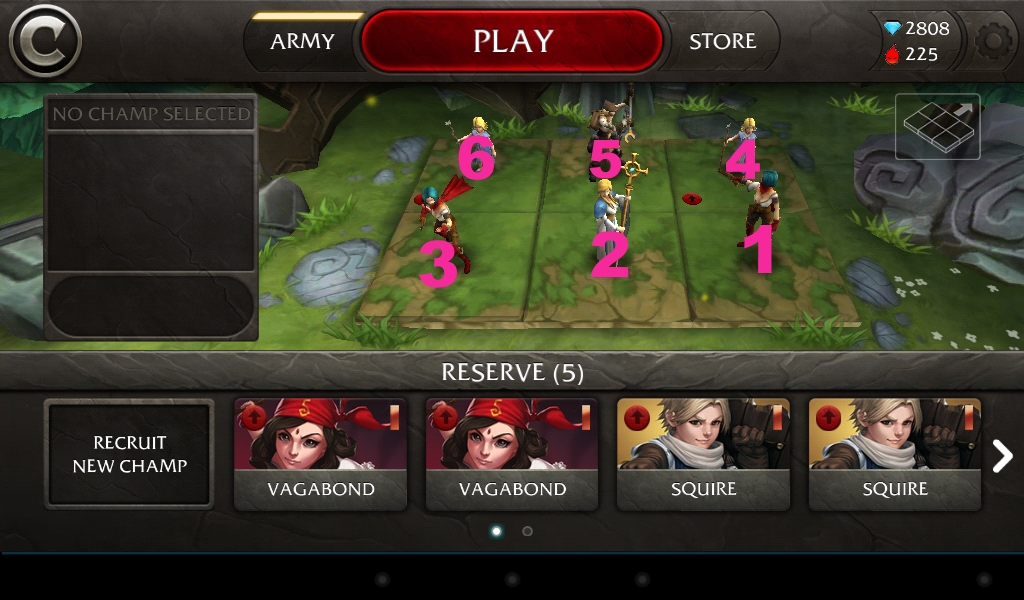 IMPORTANT: This is how the Squad Layout should be, never change it if u are using this setup, EXCEPT if you are playing campaign missions. If u disregard this information and do change the layout, your experience with this setup will not be to its full performance, For the default layout for this setup works in every battleground map which these next pictures will show u why. NOTE: As you see, there are numbers on each Champion, these numbers will guide you on the map layouts on were to place your champions are the recommended destination points.

Placing Your Units on The Field[edit | edit source]

For this setup, i will show u all the various maps that u encounter so you know were to correctly place your units, IMPORTANT: Please check the SQUAD LAYOUT IMAGE FIRST, and look at the numbers placed on each champion, that will be your legend to were the champions are at in the field. Each map has a set of numbers COVERING THE CHAMP AND THE CHAMPS DESTINATION POINT. You will see a second set of the same numbers on the screen, that indicates the recommended spots that you should place your champs at for full performance of this setup. NOTE: you might see a third set of the same numbers in some area, if you cannot reach the first destination point (Which is most likely a ENERGY TILE), then it is recommended that you place your champ at the secondary destination point on the field to take out the enemy target.

Below are a few Examples of were to place your units. (All PVP maps and LVL 10,11 Campaign Missions are listed below.) 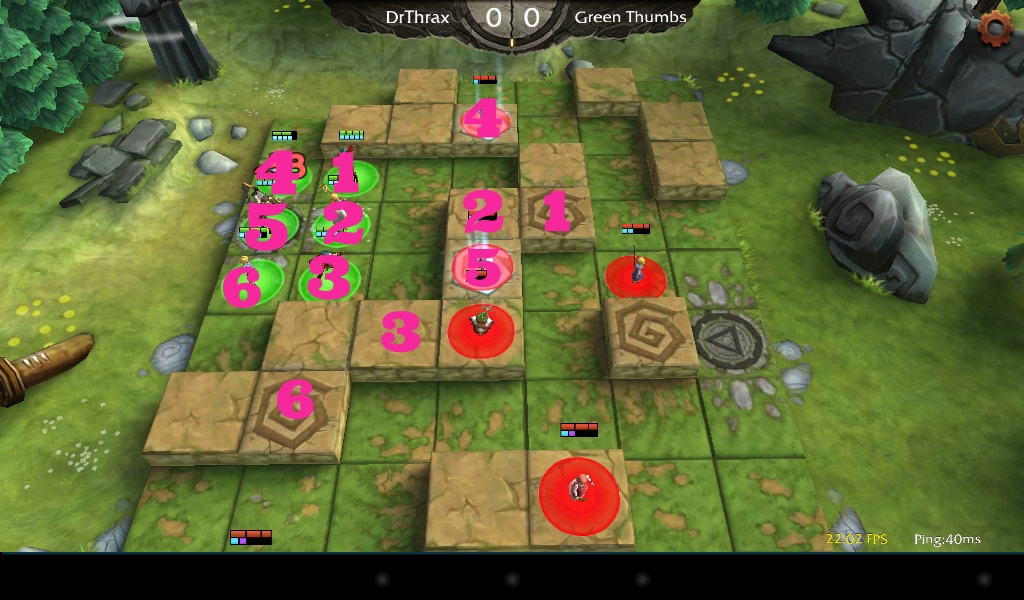 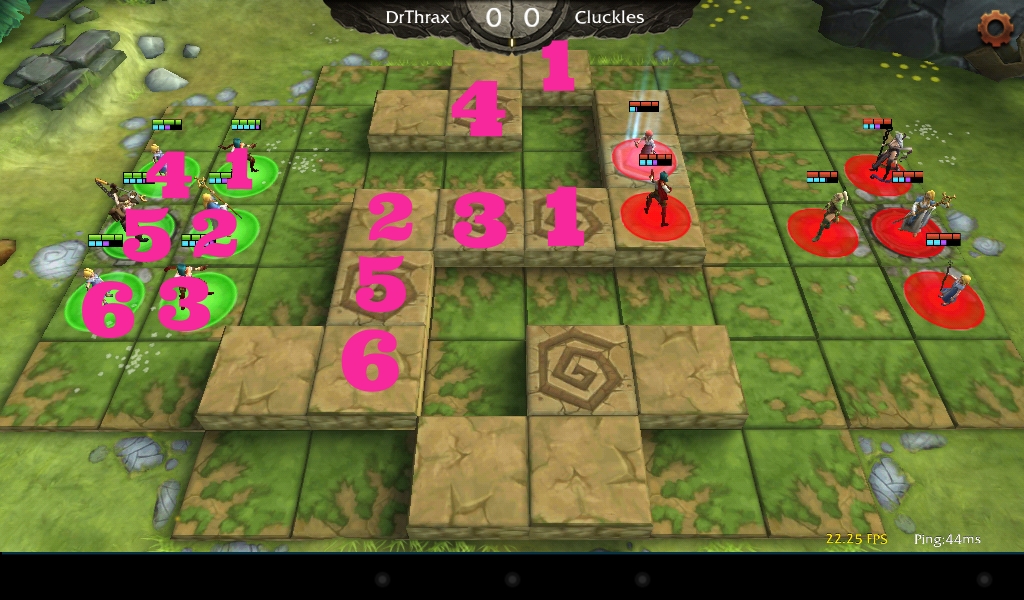 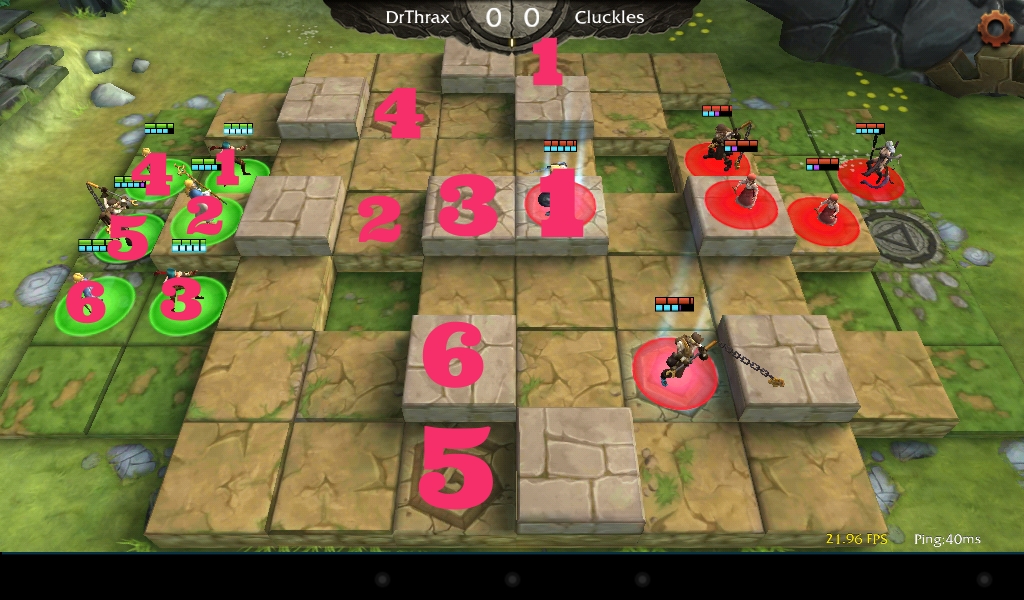 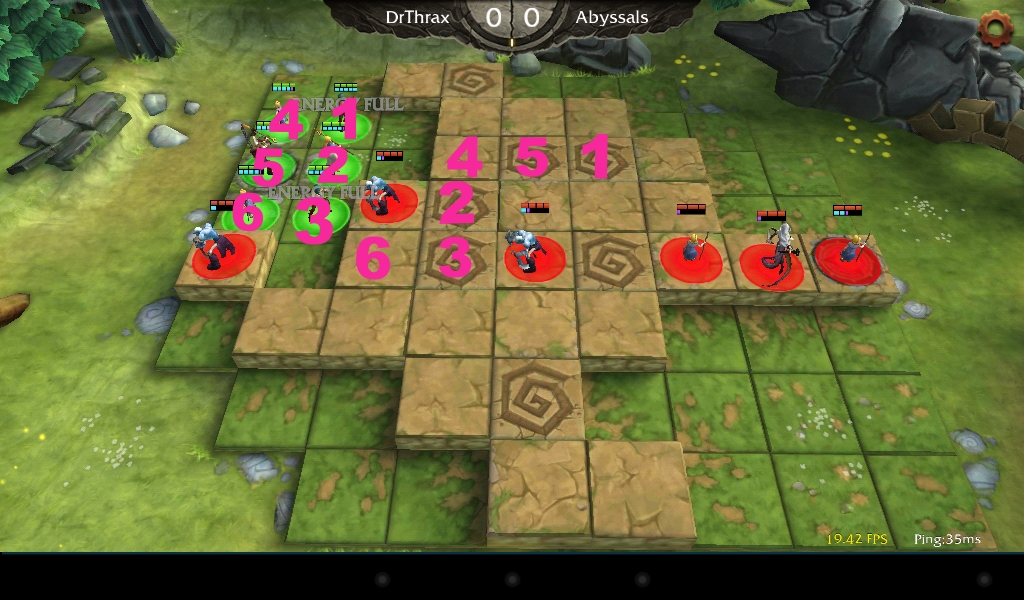 As you see the pictures above, it shows were to place you Champs on the map, it also marks them with a number, there are two sets of numbers. One number will be on the champ, and one will be on the field. However, in some of the images you will see that there is 3 sets of the same number, EX: Three 1's. This third number of the same set is the alternative route you should move too if u are unable to reach the first destination. 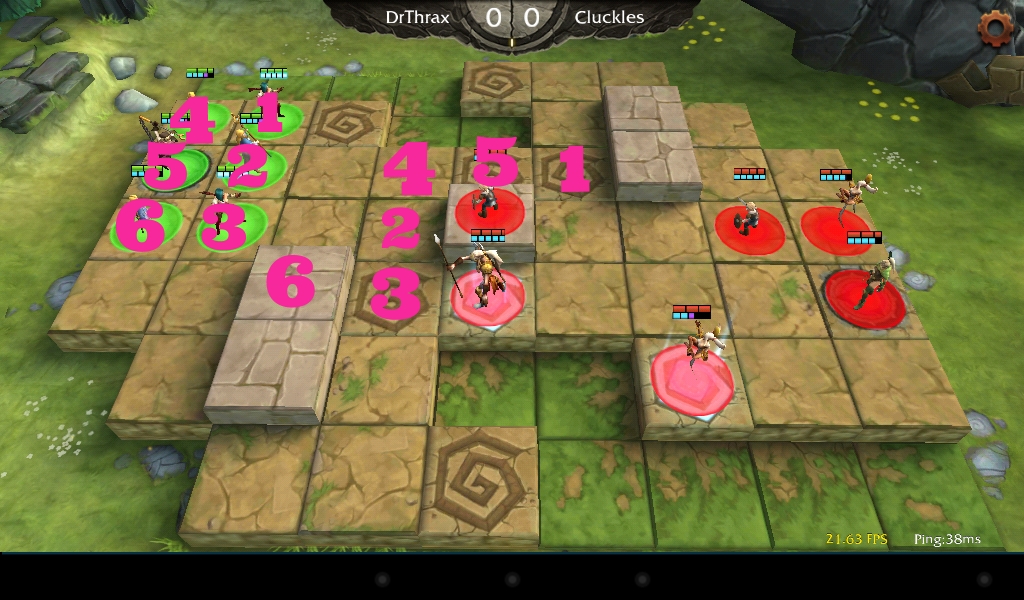 The picture above, will be the one i will be using as a Example of how to correctly play this setup. The first priority that you should do is to move your Champs to the correct destination point. in doing so that is just the first part of this strategy that you must master. it is a must to land your champs to the correct spots because this setup is strictly to lock down your opponent. if u take a Good look at #1 (Bandit) and see were the destination point for the bandit on the map is, you can clearly make out that the bandit needs to move TWICE in order to get to her destination point. on this map moving that bandit first is the first move you should ever do. it is not exactly hard to move the bandit there because you can move her once more right after she has reached her first end Tile, then she can quickly moved on to the next. Grabbing this first tile will lead you into success because now you can get your engineer on a Energy Tile too. As you see #3 Bandits destination point, you cna clearly see why i had not placed the destination point up once more. the fact of doing this is because 90% of the time the enemy player will move to that spot first before u can. if u are lucky however, you should move up to that spot so # 6 (The Apprentice) can reach the first destination Energy tile.

if you look at were the locations of the healers are at, you can clearly see that they are all next to eachother, thus creating a chain heal effect which can grant swift healing to one of your bandits that is being focused down, or if the enemy tries to flank u can turtle it out until your apprentices and bandits are able to pierce shot and mine drop behind you, so u will be safe. Alongside that your apprentices are also at very good locations to Be on the Offensive to Combo attack with your Bandit and engineer, and to also heal your team at a safe distance.

Notice #5 destination point, that point is were the engineer should be, at this location the engineer can reach every single one of his teamates to provide them with a boost of Energy. And the fact that the engineer is also on a Energy tile he will be able to provide that ability rather quickly. it is best that you balance out on who you provide energy too, if u are on the hard offensive, make sure to keep providing the Bandit with the most enemy's near fueled. when on defensive mode it is best that u keep the cleric fueld so she can provide her defense shield to your champ that is Being the most focused down.

Once you have mastered this Concept of Locking down the Middle and outter center areas of the map you will become unstoppable.

If u are still not interested in this setup then my last suggestion is that you try it out yourself! Which the last suggestion means that it is the best suggestion! Thats it for now if u have any more questions feel free to PM me on Champs Battlegrounds forums, my Name is Drthrax. Peace!